The Moon family of free crypto coin faucets is one of the most popular around and it’s just got even better with the launch of Moon Dash.

As you can probably gather, this a free cryptocurrency faucet for the Dash coin which is becoming increasingly popular among coin investors as it has posted some pretty impressive gains throughout 2017.

Moon faucets already offer Bitcoin, Bitcoin Cash, Litecoin and Dogecoin and the launched of Dash coincides with the CoinPot microwallet service launching support for both Dash and Bitcoin Cash. Dash Browser mining has also been added.

This suggests that in the not too distant future Moon may well launch a Free Bitcoin Cash faucet as well as it is solely tied into CoinPot. So watch this space. 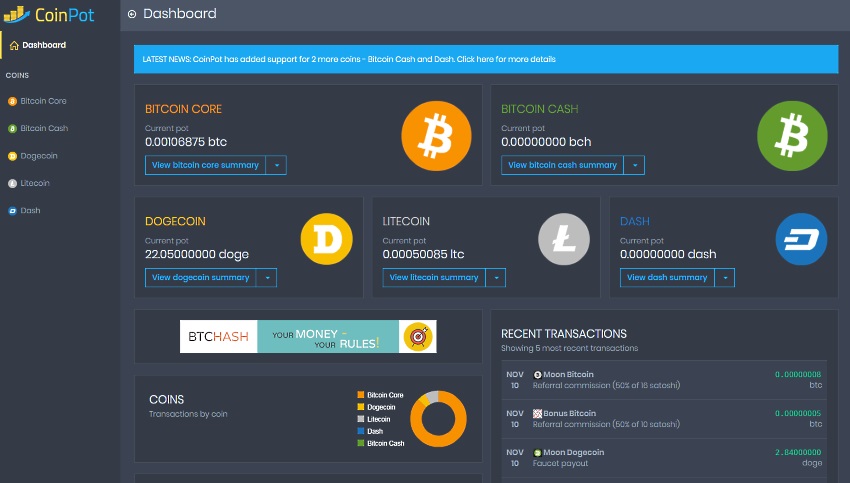 Growing: Both Dash and Bitcoin Cash have been added to CoinPot.

If this happens it will be great news for faucet collectors as the moon faucets are considered among the highest-paying and most reliable out there.

Like the others, the Dash faucet not only offers generous base payouts but also a bonus scheme which includes daily loyalty (up to 100% of claim), referral (25% of each claim) and a per claim mystery bonus which can add up to another whopping 100%.

Not only does all this increase your earnings considerably, you can also instantly convert between currencies at CoinPot. So if you’ve only got eyes for Bitcoin, you can collect the other coins and simply convert it into that coin whenever you wish.

And remember, CoinPot offers its own browser mining function for each of the supported coins, including Dash.

What this means is that if you collect from the current four faucets you can then convert all your other earnings into the coin of your choice. As you’ve probably gathered, this will help you accrue a much larger amount of said currency over a shorter period of time.

The launch of the Moon Dash faucet also cements CoinPot’s position as a secure and reliable microwallet.

Since its launch in July 2017 there has been much debate about its longevity. However, the Dash and Bitcoin Cash developments suggests the service is thriving and that there is a detailed roadmap for expansion.

If this is the case and Bitcoin Cash is added, together with potentially more cryptocurrencies in the future, this could make CoinPot a mainstay of the microwallet world and one which could eventually rival FaucetHub, which is probably the largest such site currently around.

It could also pave the way for the introduction of support for more coins and more faucets; the relatively small number of faucets connected to CoinPot at present is perhaps the only aspect of the service which holds if back from mainstream adoption.

Dash (DASH), not to be confused with Dashcoin (DSH), is an open source peer-to-peer cryptocurrency, which offers many advantages over Bitcoin, according to its proponents.

A dash of confusion: Dash is represented by the logo above, left, while Dashcoin is above, right.

Launched in 2014, Dash was originally known as Darkcoin and Xcoin. Its advantages over other coins as said to include improved privacy, faster transactions and lower fees.