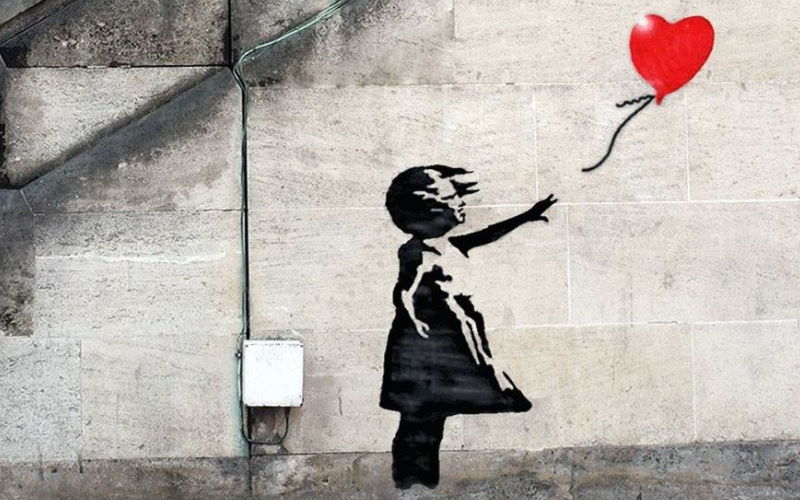 It’s one of the internet’s most enduring mysteries that has fascinated wannabe sleuths since 2009 – just who is Satoshi Nakamoto, the name attributed to the person or people who created Bitcoin?

Unsurprisingly, theories abound as to the identity of the individual or group behind the ‘original’ digital currency, who allegedly retain wallets containing around 1 million Bitcoins. They include some very credible suggestions alongside a smorgasbord of weird and downright crazy conspiracy theories.

Among the more left-field ideas is the that British graffiti artist Banksy is the one and only Satoshi.

Banksy, for those of you who haven’t heard of him, rose to international fame with his satirical street art – much of it in the form of stencils – that combines satire with political activism. His pieces can now change hands for millions of pounds and he’s attracted a celebrity following.

Some of his most celebrated works include pieces he painted at the Gaza Strip, and an installation titled Dismaland, which poked fun at poor quality theme attractions.

So how does one go from being a street artist to the creator of a piece of code that potentially will lead to the most profound changes to the standard global financial model since the concept of money began?

The rumour appears to have started because of a hidden message contained in what is known as the ‘Genesis Block’. As its name would suggest, this is the first ever Bitcoin block to be mined.


Nestled in the block’s code is the following message: “The Times 03/Jan/2009 Chancellor on brink of second bailout of banks”.

Immediately after the word ‘banks’ are four letter ‘ÿ’s that appear to be part of a variety of other characters that surround the message. It appears as such: “…bailout of banksÿ ÿ ÿ ÿ”.

Here is the excerpt from the Genesis Block:

Is this a hint… or just a coincidence? This ‘clue’ has convinced some people that the artist and the cryptocurrency creator are one of the same.

Also, he once admitted it.

You see, when asked his identity during an interview with the now defunct thecoinfront.com website, Banksy apparently stated: “I am Satoshi Nakamoto”.

However, as we’ve already said, Banksy is well known for his sense of humour, and he could just have easily admitted to being Keyser Soze.

But let’s just run with this a while longer.

One thing that is striking is that the headline contained in the Genesis Block is taken from a British newspaper which in many ways doesn’t fit with the other likely candidates put forward as the real Satoshi.

We’ve written in detail about this previously, but to summarise – they’re all American, or permanently resident in the US. Why would they choose a headline from a British newspaper to hide within the block?

Given the global economic situation at the time, it seems strange that they would single out this headline for particular mention unless they were living in the UK at the time, or regularly followed the publication online.

Was this digital graffiti?

Like spray paint on concrete, was this message – which, if you buy into this theory – a form of digital graffiti, or even a signature, that would in many ways fit with Banksy’s social commentary and political activism?

Afterall, what better way for a known libertarian with a penchant for the subversive, to stick two fingers up to ‘The Man’ than to completely rewrite the nature of his lifeblood – money.

There are other clues to British involvement if you read the reams of research that has been written on the topic.

Among other things, He/they use the word ‘bloody’ in a very typically British way to emphasise a frustrating point, something the Brits are alone in doing.

Equally, many of these messages were posted during a time frame which correlates with the typical waking hours in the UK, and not, say, the US where, as we’ve said, the main suspects are all based.

Another interesting clue comes from the real Banksy’s supposed other pseudonym.

Some people believe that Banksy is actually Robin Gunningham, who was born on July 28, 1973, bear Bristol, the site of much of his early work.

According to The Sunday Times, Gunningham began using the name Robin Banks, which later led to Banksy. Robin Banks, of course, is a play on ‘robbing banks’. Could this mean robbing banks of their global financial monopoly?

This would tie in nicely with the rest of the theory, but Banksy’s identity has never been proven so this may be another red herring.

Incidentally, The Sunday Times is the sister paper to The Times. Another clue perhaps?

Another less compelling piece of the puzzle is that in some of his more recent work, Banksy has referenced Bitcoin.

But so have many other artists as cryptocurrency becomes more of a global phenomenon and further enters the mainstream. For example, Parisian street artist Pascal Boyart includes QR codes in his work which enable him to accept Bitcoin donations from admirers of his work.

There are some tasty morsels above, but the reality is that Banksy by all accounts moved in very different circles to the programmers and cryptologists who are likely to be behind the daddy of digital currencies, including, if accounts are correct, a spell in prison for petty crime.

But nonetheless there are some alluring parallels between Banksy’s political views and the nature of a digital currency designed to subvert the paradigm model of cash and liberate the world financially by creating what Satoshi referred to as a ‘trust-less’ system which removes the traditional third party intermediaries needed to carry out digital money transfers.

Here, however, the trail goes cold and, like Satoshi, Banksy has managed to keep his identity mostly a secret, despite being active since the 1990s.

A lot of people are convinced they know the identity of both Banksy and Sataoshi, but there are still pieces of both puzzles missing.

Both mysteries may never be solved until the individuals themselves step out of the shadows and tell the world who they really are.